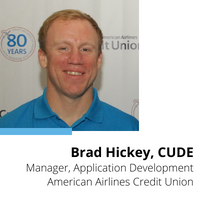 “DE wasn’t just about the credit union movement, it was about the world at large,” said Hickey. “As most IT professionals will tell you, we don’t always get to see the impact our work has. DE helped clarify that connection for me. I could see how what I worked on affected my community.”

Life changing … but now what?

All DE graduates are encouraged to return to their organization and undertake a project. Something that operationalizes what they’ve learned. And like many a graduate before him, Hickey was stumped.

“You leave with this energy, and then you find yourself mulling over ways to turn that experience into something good for the community. But there’s so much need, so much opportunity, it can be difficult to take that first step.”

As he considered his next move, Hickey had the chance to be part of another formative experience: the annual American Airlines (AA) hackathon, where hundreds of the airline’s employees are tasked with finding ways to transform the organization. The experience gave Hickey the inspiration he was looking for.

Hickey’s vision was to give the credit union movement a platform to transform IT with and for one another. He and a friend workshopped a few ideas, came up with a mission and vision and created a non-profit: CU Build.

The premise is simple enough—bring brilliant IT people together to tackle some of the fundamental technical issues facing credit unions. For Hickey, an obvious place to focus this Build-a-Thon (“Hack” isn’t a popular term for credit unions!) was core processing.

Every aspect of CU Build was designed with the cooperative ethos in mind.

“We know it’s tricky when you’re building on the foundation of a for-profit company’s product (i.e., a core processor, in this case Jack Henry’s),” said Hickey. “We had that awareness in mind from the outset.”

Hickey and his team made sure cooperative principles were embedded in their process and the structure of the non-profit itself. Even the judging criteria for CU Build requires solutions to address the credit union mission on some level.

“Something relatively benign that doesn’t move the needle—like cutting fees—isn’t going to win, it has to go deeper,” said Hickey. “We even have a specific award for that recognizes teams that emphasize serving the underserved.”

In addition, all solutions had to be licensed under MIT Open-Source Licensing: the team wanted anyone within the Jack Henry ecosystem to be able to take the code, clone it and do what they wanted.

SaveMore, the winning solution, has the potential to transform the way credit unions look at relationship pricing.

“Typically, the more profitable a member, the bigger their payoff—a bigger dividend or higher savings rate,” said Hickey. “But what about members of modest means? They may never have the resources to tap into those bigger payoffs. SaveMore provides an opportunity for credit unions to recognize and reward them equally.”

SaveMore is a two-year participatory program: The member commits to the timeline and a series of positive behaviors and gets access to a three-tier savings rate that has the potential to beat even those in a higher account brackets.

“The data shows that members who are struggling often just need a simple life raft—something to kickstart their savings and goals and turn their financial journey around,” said Hickey. “SaveMore can be that life raft.”

CU Build is working with the winning team to bring the solution to a full production-ready state—it was at 90 percent complete at the time of writing. Though anyone who’s part of the Jack Henry ecosystem could also jump in and finish the solution themselves!

Although Hickey is thrilled by the tech ideas that have emerged from CU Build, he believes the most value is elsewhere. “What we’re really building is people and careers,” stressed Hickey. “We’re giving participants access to tech they’d never play with, people they would never interact with. As cool as it is to develop awesome solutions, it’s even cooler to see what a difference it’s making for the participants.”

Another benefit from CU Build has been introducing for-profit tech companies to the credit union difference.

“I’ve heard time and again they’ve never seen anything like it, and they’re just blown away by how genuine and passionate people are—it’s palpable,” Hickey said.

The fuel that started it all

“I don’t think you can overestimate how much what you learn at DE can fuel a project,” said Hickey. “DE lets you get really gritty with yourself and helps keep your purpose constant. If I hadn’t gone to DE, I don’t think I would have had the perspective to see what CU Build could mean for the community. I don’t think it would have the fervor it does.”

Discover the difference DE could have on your credit union, and sign up for the next CU Build now!