My name is Lisa Gill, I’m 55 years old, and I have ovarian cancer.

How did you find out you had cancer? 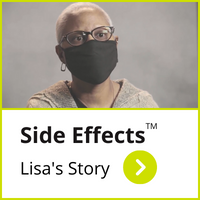 I learned I had ovarian cancer because I was working out every day but my stomach was still protruding, and I started having pain on my right side and it was hot. That was really strange.

I was working for an insurance company and knew how insurance worked, so I went to the ER for more tests at one time. When I got there, they did an ultrasound and found that I had a cyst on my right ovary. From there, I had to contact my gynecologist. She took a look and she thought I had a kidney infection or a kidney stone. She said she’d keep an eye on it.

In the week between the ER and gynecologist appointments, I’d lost five pounds and I was like, something isn’t right here.

I work around nurses, so I started investigating what would it feel like if the cyst were to pop. They said it would feel like childbirth. That was enough for me. I’d had three kids and I was like, oh no, huh uh, you gotta take this thing out. And so, she agreed to give me an appointment in two weeks. And when I go to that appointment, I’ve lost another five pounds. I’m like, is anybody watching this weight loss? The doctor said that yeah, she’d noticed it.

When she did the surgery [to remove the cyst], the cyst was so big that they couldn’t save the ovary, so it had to be removed. Anytime tissue is removed, it has to be biopsied, and that’s how I found out I had ovarian cancer. That was February 25, 2013.

I’m still in treatment. I go every Friday for an hour and a half.

My cycle has changed dramatically over the years. I first was doing Taxol for about two years. Then I saw a story about the truth about cancer, and I decided to run away from conventional treatment and did holistic for two years.

I ran out of money, though. It’s very expensive and insurance doesn’t pay for it. It’s all out of your pocket, so I had to come back to conventional. 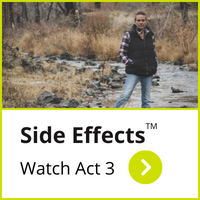 I’ve had three surgeries [since then]. Last year, I was hospitalized three times because we tried to do different chemo pills. The first chemo pill really wiped me out and dropped my white blood cell count very low. We tried immunotherapy but that didn’t work, so we went back to Taxol. That seems to be the only thing shrinking the tumor; it was 8cm but is now down to 5cm. I hope we can get this thing shrunk and go back to some holistic treatment as well.

I was only given two to three years to live. I think this is my eighth year, or is it my seventh? Whatever! I’m still here! I beat the odds! (laughs)

How has this affected you emotionally?

And then, during that crisis, I got divorced. I was like, “Lord, have mercy! What else?” No wait…don’t ask that question!

How has your battle with cancer affected you financially?

I’ve been on disability at least six times. When you go from 100% to 60% of your paycheck, and one of my surgeries they told me it was a weekend surgery and it ended up with me being out of work for six weeks. I was not prepared.

It’s been a struggle with finances, but God has taken care of us. My children kicked in and helped out. Two of my children live with me. It is stressful to have to depend on somebody else because they could decide to move out at any time. It’s just really, really tough.

Nobody really offers cancer patients anything [financially]. You’re just on your own. The hospitals give you maybe a $50 gas card, maybe $100 one time to get food, but it’s not enough.

How much have you paid out of pocket?

I’d estimate it to be $50,000. I had to take out a 401k loan of $20,000 to do holistic treatments. I work in insurance, so I was kinda smart the first few years. I knew that my deductible and out-of-pocket rolled over every year, so I knew how to keep that going. But then, they decided to do the whammy, where now you have the high-deductible – the $4,000 big boy – so that’s $8,000 by itself over the last two years, so it’s been stressful.

Even though you set aside money, when the bill collectors and the hospitals call, they want their money. Now. But you don’t have everything to pay them now, so they send you to the collection agency anyway.

Did you ask your bank or credit union for help?

No. I asked my mortgage company for help. The help that they decided to give me was a $30 reduction to my monthly payment, and to extend my mortgage from 15 to 30 years, and I’d already been in my house for 15 years. That was the “help” I was going to get.

I had a bank and a credit union at the time. One of the banks knew that I had cancer. I told them about it, and they were like, “Oh, well, you know, we’ll give you $25 for opening a new account because we support cancer.”

What do you wish banks and credit unions would do to help cancer patients?

I wish they’d give us some type of loan, with a low interest rate, that would roll up all our bills and help us pay them…I wish they would let cancer patients have a line of credit at a lower interest rate so we could pay this massive debt off.

How did that financial strain affect your health?

It definitely had something to do with my health. You think about money and bills constantly every day; how can I better myself at 55, where can I go, what can I do, what am I missing out on?  It’s just constant. I want the Lord to just shut my brain off so I can get some sleep. I don’t wanna think about bills or money or any of that stuff. I just wanna go to sleep.

Any final words of wisdom?

Cancer is a battle, and it starts in the mind. You gotta keep your mind strong and believe you can win in the end.