America’s Credit Union Museum (ACUM) has announced the inductees of their newest exhibit, “Credit Union Women Making History: Herstory,” which highlights a range of credit union women and their achievements in the credit union industry. Set on honoring the past, present and future of incredible women making history, “Herstory” will be an interactive exhibit showcasing women’s stories never heard before.

“Herstory was created as a lasting legacy of women whose contributions have propelled the movement forward for generations,” said Stephanie Smith, Executive Director at ACUM. “We’re excited to honor these women and celebrate their inspirational leadership and their commitment to positive change for credit unions.” 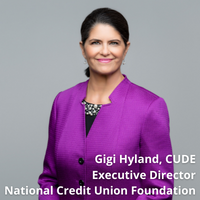 “I’m profoundly humbled to be honored as an inductee to America’s Credit Union Museum’s newest exhibit,” Hyland said. “It’s particularly meaningful to join my incredible fellow inductees – women who have been mentors and served as inspiration to me.”

Also included as an inductee is Lois Kitsch, retired former National Program Director, who spent 13 years with the Foundation.

The new exhibit will premiere at ACUM’s 20th Anniversary celebration on Thursday, September 29th, 2022, beginning at 11:00 am. In addition to a physical display at the museum, the exhibit will have an online presence that shares stories through virtual visits. During this celebration, twenty women of the credit union industry will be formally inducted.

For more information on the Herstory exhibit and event, visit www.acumuseum.org/herstory.html